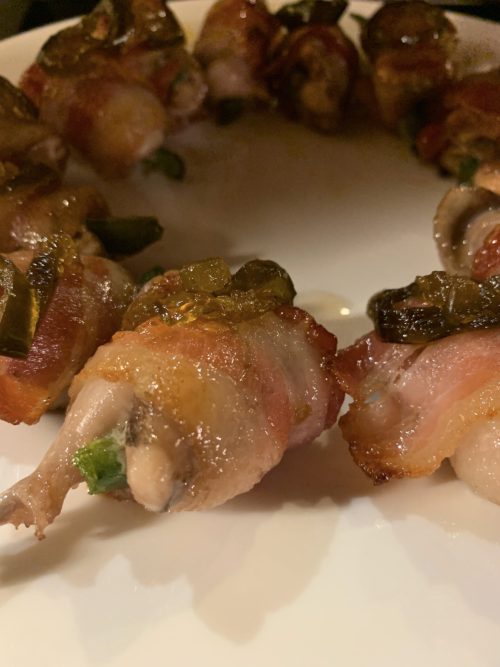 Sometime last year I was visiting my daughter, Alexis, in Austin and one day her mother-in-law, Kittie took us to Jack Allen’s Kitchen for lunch. We ordered some quail legs for an appetizer and they were so delicious I knew I had to try and recreate the recipe. (Thanks for lunch Kittie.)

At Christmas we rented a house on Lake Travis and it was a nice big house where we enjoyed five nights of being together, playing our favorite game, Catan, and of course cooking. The kitchen wasn’t as well stocked with equipment as I would have liked but we made do with what we had. My son, Paul, and I are pretty hard to please when it comes to the way a kitchen is equipped; but we managed to do some Escargot and these quail legs for appetizers while there.

I had to go back and look at my pictures to see what was on Jack Allen’s appetizer and it was pretty easy to recreate; some balsamic drizzled on the plate (I didn’t have any at this house), a little micro green salad with fig; a little jalapeño jam and I also used a peach habanero jam for a glaze.

The night we did our fish fry at the lake we made these as an appetizer. We baked ours in the oven and next time I want to experiment with precooking the bacon some and also want to try wrapping these and cooking some in my sous vide and then finishing off in broiler or pan frying to crisp up the bacon. However you decide to do them, they are delicious. Hope you don’t mind eating something off the bone; I don’t. In fact getting the meat off the bone is the best part.

BLAST FROM THE PAST: My Peanut Butter Shadow Cookie has had 29,499 views. Now, if I could just get viewers to comment on it. Seems like some bloggers can blog how to make marshmallows and get 300 comments; I have a hard time getting one comment. Maybe my comment section is hard to find. Who knows?

We poured a little olive oil on the legs. Partially cook the bacon in the microwave or a skillet. Lay one leg/thigh of the quail on top of the end of a half piece of bacon and top with a sliver of jalapeño pepper. Roll the bacon around the leg piece and fasten with a toothpick. We used a sprig of rosemary that we grabbed from the yard to best the legs with the melted jalapeno jam. I mixed some micro greens and sugar pea sprouts and some of my Israeli dates with a little balsamic and a tiny bit of olive oil to make the salad to go with these legs. To plate individually I put dots of balsamic and peach jam on the plate and put the sprout salad in the middle of the plate. These were topped with a candied jalapeno right before they came out of the oven. 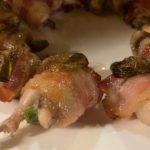 When I had these at Jack Allen's Kitchen the plate had a micro green salad in the middle and dots of balsamic vinegar around the edge of the plate. At Christmas I didn't have either of those at our rental house. When I make these again, I will update the picture. 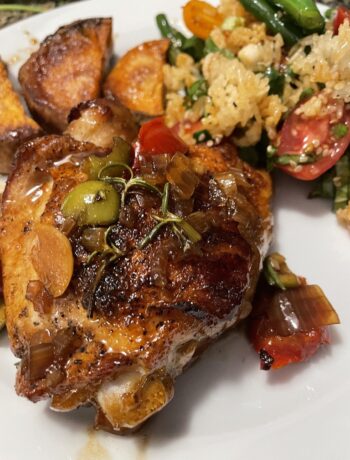 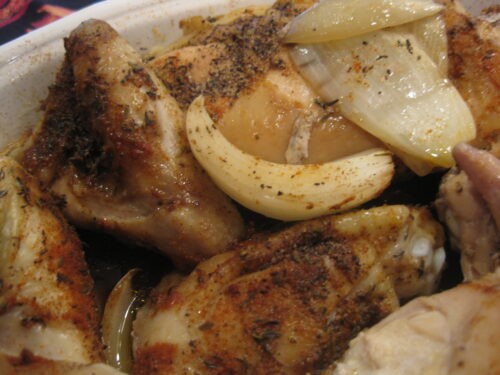 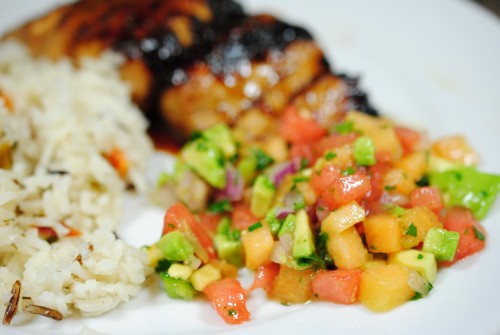