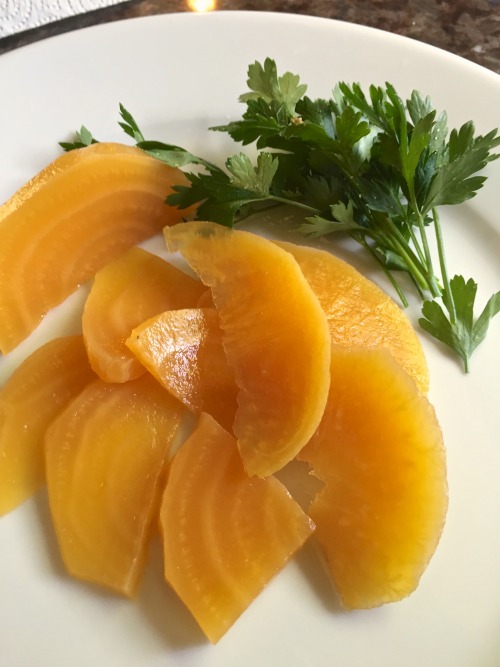 My husband has always said he doesn’t like beets because they are red and he doesn’t like red food. Now that doesn’t make sense since he does eat catsup, tomatoes, etc. So I decided to make golden beets to use in a salad similar to one I had at Luke’s Restaurant in New Orleans. That recipe will come in a couple of days.

Usually the beets I eat are pickled. For years, that was the only thing I knew to do with a beet. And, of course, they were red beets that I pickled and they bled all over everything and if I wasn’t careful I would end up with a blood-splattered looking top.

After I started this blog I became more adventurous in trying new recipes. I’ve always liked cooking but never really went out on a limb to try different things. Then I tried fried beets once at East Side Kings in Austin and I made them almost immediately after returning home. My French Fried Beets with Japanese Mayonnaise is one of my favorite appetizers; I now cut them in slices and not chunks like ESK make their’s. Then my next adventure in beets was with my Roasted Beet Napoleon; stacks of deliciousness. And, who could pass up my Pink Heart Egg Finger Sandwiches where I used the beet juice to dye my hard-boiled eggs then cut tiny beet hearts as a garnish for the egg sandwich.