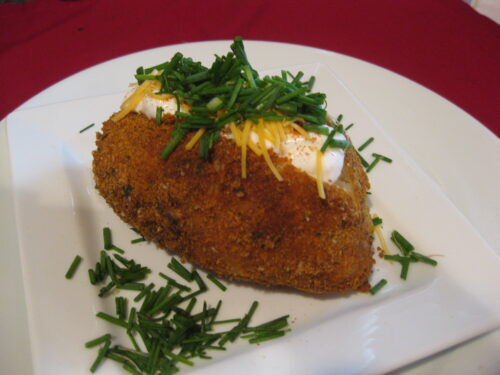 Remember that  rhyme for picking who is going to be “it”. Everyone would put out two fist and whoever was doing the taping would start — One Potato, two potato, three potato  four, five potato, six potato, seven potato more. Each time “more” was said whoever got their fist tapped would have to put that hand behind their back. Last one left holding out a fist was “it”.

I don’t think kids play these games anymore, any more than they play kick the can, Mother May I or even pinch lightening bugs tails off and make “diamond” rings from them.

This potato is great for all those people who don’t like to eat the potato peel plus they are so much prettier without that big blob of aluminum foil sitting on your plate.

For those of you who love seafood, this recipe has some added to the potatoes. Years ago I used canned crab and shrimp. Living in Texas for the last 20 years, I wouldn’t think of getting any kind of seafood out of a can. So for this one I bought a set of snow crab legs and a few shrimp. I had a professor once in one of my cooking classes that said you should never cut a potato in half for twice baked potatoes. So after baking, just cut a 1/4 or so off the top and scoop out the potato pulp. After baking the potato I scoop out the potato pulp, mix in some butter, sour cream, crab meat and the shrimp and a little salt and pepper.  I still have some of my Williams Sonoma Chili Lime seasoning left so I sprinkle it on my raw, peeled shrimp and saute it to go in the potato.  I chop it up and leave a couple to garnish the top of the potato. I rub the potato with shortening and then sprinkle with Kosher salt. I like the look of the crunchy salt on the outside. Just be careful not to knock it all off when you start scooping out the potatoes.

Herb Crusted Fanned Potato — I’m a fan of this one for sure. These are also called Hassleback potatoes. One technique to keep from cutting too deep is to put a chop stick on each side of the potato so that the knife does not go all the way through. I find it easier to do without the sticks. Just be careful not to go all the way to the bottom. But, the deeper you go the more the potato will fan out. You can see that the slices are pretty thin. My kids always liked these because they could pull off the thin slices with their fingers and eat them.