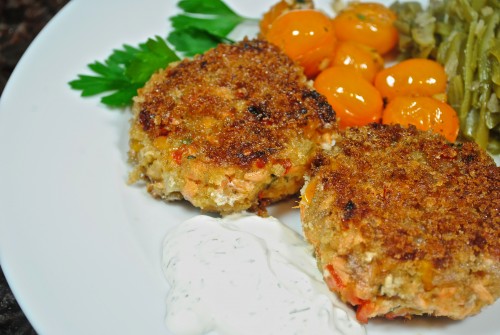 Straight from my husband’s pole.

HAPPY NEW YEAR EVERYONE! And thank you for coming to my blog. I can’t believe this June I will have been doing this for five years and I’m still going. I guess I have to cook so why now share what I’m doing with you all. I hope everyone had a happy and safe New Year’s and ready for 2014. I have a new grandson making an appearance in April. This will be our fifth little boy and my daughter’s first baby so it’s going to be so much fun seeing her and her husband become parents. I have to say it again even if I have said it a hundred times — the best part about being a parent, I think, is watching your own kids become parents.

We have been eating salmon and halibut, at least once a week, since my husband got back from his fishing trip from Alaska last August.

Growing up we had salmon patties or croquettes (whatever you called them back them) quite often. They were always made from canned salmon and you will never believe what we like to pour over them for a sauce — canned mushroom soup.  Believe me it’s good. I’m not going to pour canned soup over Ina’s recipe but when I make salmon patties from canned salmon I STILL heat up some thick mushroom soup and my husband and I pour it all over our crispy patties.

I wanted my husband’s salmon to be the STAR of the cakes not the vegetables so I added twice the amount of salmon that Ina’s recipe called for. I tried baking some and frying some. The ones fried were a little harder to turn and the ones I baked were not as oily tasting.  Either way, they are delicious. Baking is a lot easier if you have a bunch to cook.

Seems like all the crab cake recipes I have ever tried were pretty simple — crab meat, red onion, and red pepper, maybe a little mayo and a couple of tablespoons of breadcrumbs to hold them together. This recipe could be done in stages.  For one thing, I would mince all the veggies the day before; this would save a lot of time.  In reading through some of the comments people made on her recipe a few people said they froze uncooked cakes and cooked them at a later time with great results. I did this as it make about 15 cakes and even though we love fish even we could not eat that many salmon cakes.