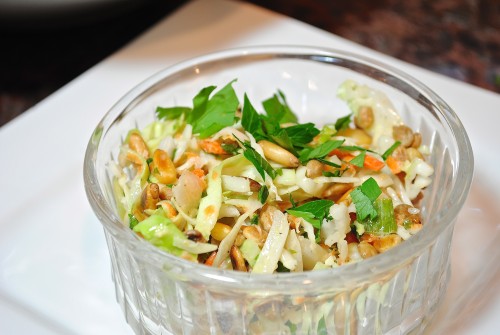 How many ways have you prepared slaw?

I’m not sure what the difference in a coleslaw recipe and slaw recipe is, but here’s my take on it. Coleslaw is usually shredded cabbage and maybe vegetables but always has some type of mayonnaise based dressing poured over it. Slaw on the other hand, to me, is something as simple as shredded cabbage with vinegar, salt and pepper and a tiny bit of oil that we put on top of our pulled pork bbq (You would never put a mayo type slaw on a pulled pork sandwich in my opinion.). The Asian slaw that a lot of people make with the browned almonds and Ramen noodles is a SLAW not coleslaw.

I’ve also made a lemony purple and green slaw that you keep the two colors separate and they are both dressed with the same oil based dressing. You can’t forget KFC coleslaw, of course, I love the stuff and I found a recipe years ago from Top Secret Recipes that to me is just as good as the Colonel’s recipe. (See bonus recipe below for KFC Coleslaw.)

One weekend my husband decided to do some very thick (1 1/2″ thick cut pork steaks) and as usual they were so tender you could cut with a fork. This COLESLAW was just the needed crunch to the meal. I substituted the almonds with toasted sunflower seeds AND pinenuts. The recipe from Southern Living called for bagged coleslaw mix which I used but I would have preferred to buy a red cabbage and green cabbage so the coleslaw would have had more purple cabbage mixed in.