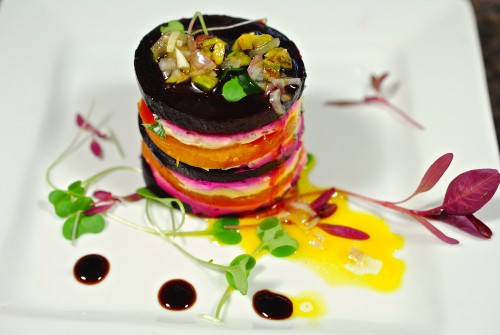 Oh no, something red on the plate!

Beautiful except for the fact that the beets bled into my goat cheese.

Back in the summer I did dehydrate some thinly sliced beets and sprinkled them with some Herbs de Provence and they were delicious; just ask my friend, Linda, who has a really funny story about the after effects of eating too many beets.

This is the time of the year that really nice beets should start appearing in the markets. I can’t wait for my farmer’s market to have them because they promised the candy striped ones too along with the orange and red ones.

I found a couple of beet napoleon recipes; one on Pinterest from fifteenspatulas.com and I think she had gotten the idea from Saveur magazine and then saw a similar one on Foodnetworks website. I like the idea of cutting in wedges if you have really big beets. On Food Network they cut in wedges and and put three of the wedges together, pointed sides out and filled with micro greens or salad. For my salad I tried both ways, one in wedges with just one to a plate and then one of the stacks on a plate sprinkled with some greens and pistachios.

My only recommendation would be to have everything ready early but put together right before serving. I had mine all ready the night before I took the picture and thought if I refrigerated them overnight then the cheese would set up; not thinking that the red beets were going to turn the cheese purple. Oh well, I learned a lesson and won’t make that mistake again.