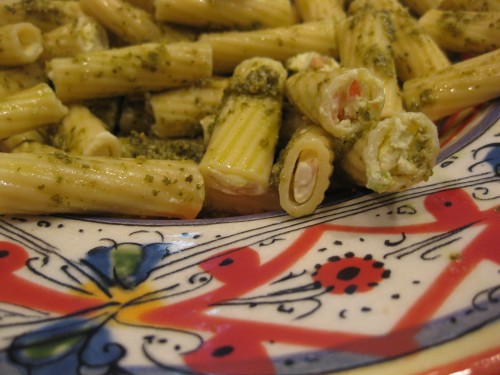 I love anything made with pasta and these little tidbits make a fun appetizer.

I didn’t make this rigatoni pasta (I used one I bought in the store). I did make the filling and fill the pasta. BUT tomorrow I am teaching a technique class at Williams Sonoma, demonstrating our KA pasta press. I took our demo model home so I could try it out before the class so I could get the hang of making fresh pasta. It was so much easier than I thought it was going to be. In fact, I took it home on Wednesday and kept putting it off until late Saturday afternoon because I thought it might be complicated. I don’t know why I did that because I’m always up for a challenge.

I have the pasta roller attachment for my KA and have made rolled pasta but never thought of making pressed pasta shapes like rigatoni, spaghetti, macaroni, fusilli, or bucatini. Within just minutes, I had the dough made and was whipping out all of the above mentioned pasta shapes. It was really a lot of fun. Then I though, what the heck, let’s throw in some spinach and make spinach pasta. I was beautiful.

Three years ago we were in Italy and took a cooking class. There were six of us traveling together and our villa offered cooking classes in their restaurant. Our chef/owner was Fredrico and we made about six kinds of pasta that day. When we were using the roller for the flat pastas, it was like the I Love Lucy episode when she was on an assembly line for a candy company. Instead of cramming the candies in our mouths like Lucy and Ethel did, our strips of pasta kept getting longer and longer each time we took them through the machine (this was a BIG machine) and we had the pasta over our arms in folds. It was hilarious. That was one fun day of cooking.