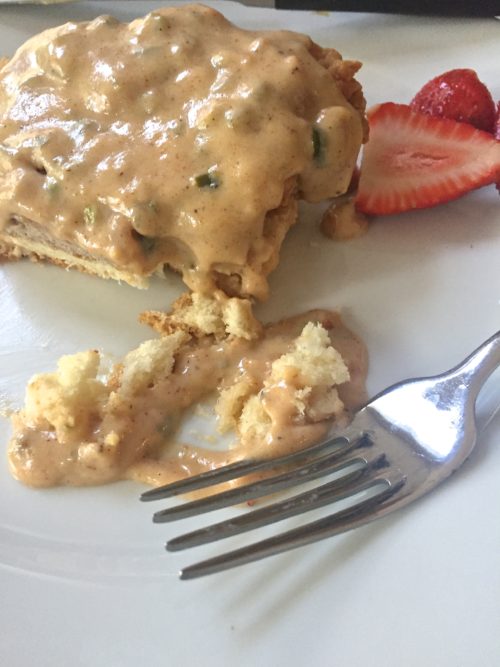 On the way to Big Bend National Park back in the Spring we stopped at the Holland Hotel in Alpine, Tx one night and I had chicken fried wild boar with a jalapeño gravy. After arriving in Big Bend we had chicken fried something again. More chicken fried anything than I had eaten in a year. The jalapeño gravy was the best part of the dish and was worth every bite because I knew I’d be making it once we returned home.

So when I called this post Jalapeño Gravy WITH Chicken Fried Pork Tenderloin that is because I love the gravy and you can literally put it on anything chicken fried. I made this when the kids were visiting one weekend and I served it for brunch; but it could easily be a dinner entree with or without the biscuit supporting the pork tenderloin which is pounded out flat, egged, floured and fried and smothered with this wonderful gravy.

The Century restaurant at the hotel had a beautiful little courtyard where we dined. And as usual, I quizzed the waiter about the jalapeño gravy. It didn’t take me long to figure out that the gravy was milk gravy with some jalapeños and a little chili powder to turn it a pinkish color. Anyone who is a fan of milk gravy and know how to make it could figure the recipe out in a minute.