Baked Oatmeal with Some Twist 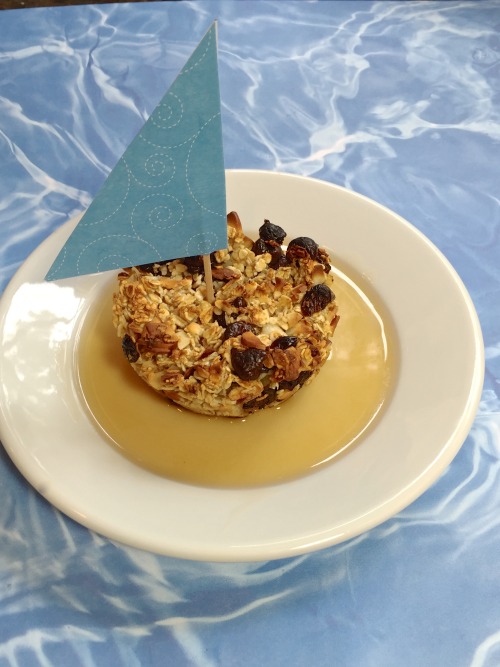 Oatmeal or Boatmeal? Depends on who’s eating it.

Maybe you don’t remember the scene out of Oliver Twist where the little boy is eating gruel (see pics below) but I do and for some reason I think that’s why I never cared for the bowl of mushy stuff. I just never saw the appeal to a bowl of lumpy cereal. Seems like steel cut oats are all the rage these days but when I did the comparison, there doesn’t seem to be that much difference so don’t feel guilty not making that bowl of oatmeal that takes about 45 minutes to cook.

While visiting in Chicago back in September on a cold wintery day (ok, it wasn’t that cold but 40’s is cold coming from Texas) my daughter-in-law, Missy, made some oatmeal for the boys one morning. This wasn’t just plain old oatmeal but it was BOATMEAL with little sails in each boat. She make one chocolate/chocolate and one with cooked cinnamon apples that we had left over from dinner the night before. She uses a basic recipe she found on Pinterest then adds in what she thinks the boys would like. The chocolate/chocolate one she sweetens with banana, syrup and chocolate chips. I’m using a chocolate ganache to sweeten mine because I had some left over ganache from making chocolate martinis one night (I rimmed the glass with it).