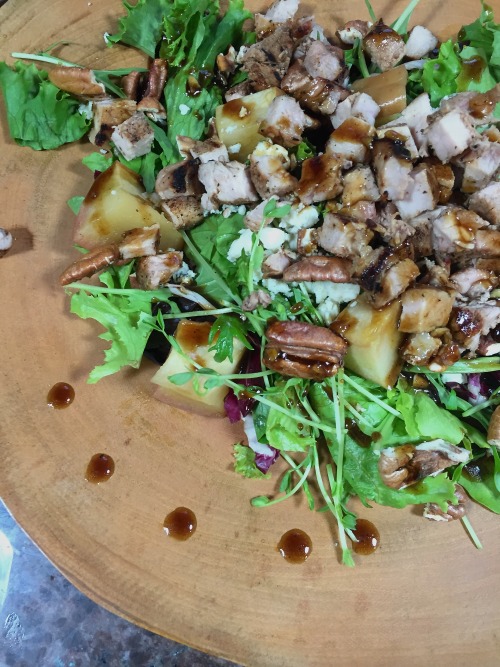 Do you love your greens and vegetables? Did your parent always say “eat your vegetables”. I feel like I’m saying that to my husband these days as he just informed me, after almost 47 years of marriage, that he doesn’t really like most vegetables. He just eats them because I make them and if he doesn’t I guess there isn’t much left to eat other than meat. He does like salads though so I get to experiment a lot with recipes.

I love greens whether it is cooked cabbage, kale, chards, baby bok choy, spinach, lettuces, you name it I like greens. Have to admit, though, that I have never cooked collard greens. We have even grilled romaine lettuce and that’s delicious when you turn it into a chopped Caesar salad. I’ve mixed kale with mashed cauliflower, I’ve put it in turkey kale soup and I’m sure there are a lot of other recipes out there using greens in recipe that I haven’t even come across yet.

I love looking at menus and trying to recreate dishes. A friend of mine was in New Orleans last year and dined at K-Paul’s so I went to their website to see what she might be eating (weird huh). This salad sounded so interesting and there really isn’t a need for a recipe. After thinking about making this salad I decided to turn it into a main dish salad by adding the grilled pork chops that I glazed with some more of the red apple balsamic vinegar, then cut the chops into strips to put on top of the salad. I love pork and apples together and this way I did not have to come up with a meat to go with the salad. My daughter asked me if I had ever put pork on a salad and I thought “why not”, we put shrimp, chicken, steak, tuna, and even bbq on top of some shredded cabbage so why not a pork chop.

Roasted apples are so easy to make, you just throw them in the oven with a tiny bit of oil and that’s it. K-Paul’s salad called for Pears, but I prefer apples to pears. For my greens I like a mixed green with some Frisee lettuce in it along with some radicchio. So, how hard could this salad be other than roasting some apples, throwing in some roasted pecans that you can roast while doing the pears. Toss in some crumbled blue cheese and come up with a Red Apple Balsamic honey lime vinaigrette dressing (which I have done for you.). Usually frisee is hard to find so any of those fancy mixed lettuces will work.

I have to say by the time I finished the dish, my recipe did not even resemble K-Paul’s. I made a Red Apple Balsamic vinaigrette instead of his lime vinaigrette, I changed the pears to the apples and I added the pork chop. But thanks, K-Paul’s for the inspiration anyway

BLAST FROM THE PAST: One of my most requested salads when I catered was this Emerald City Salad (Really Crunchy Romaine Toss, I renamed after seeing Wiz with my daughter one weekend in Austin.) 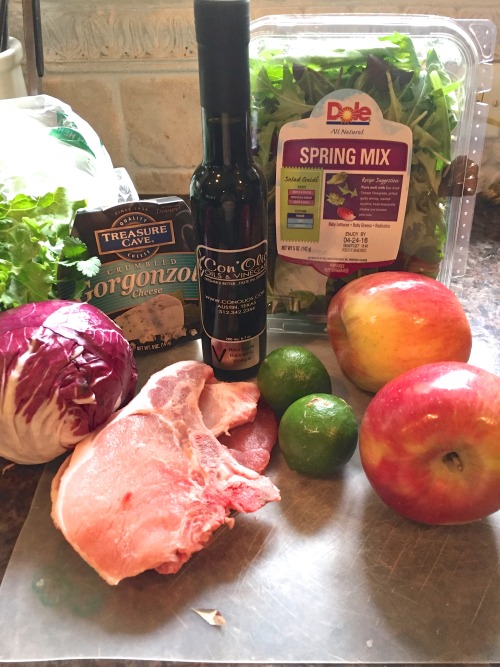 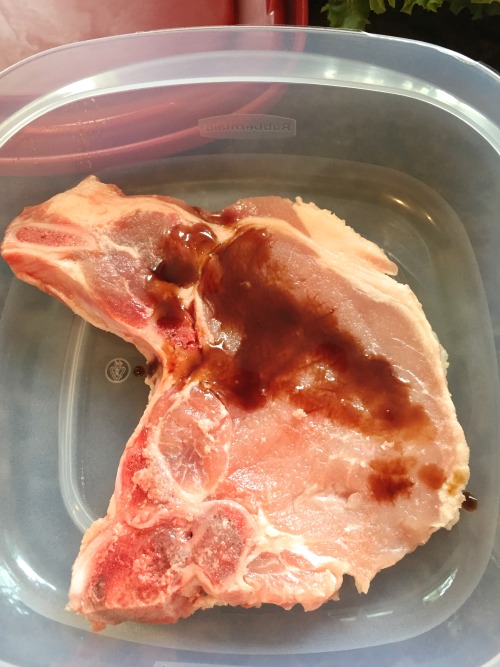 I brushed some of the red apple balsamic (or just use regular balsamic) on the pork chops and let stand in refrigerator for an hour or more. 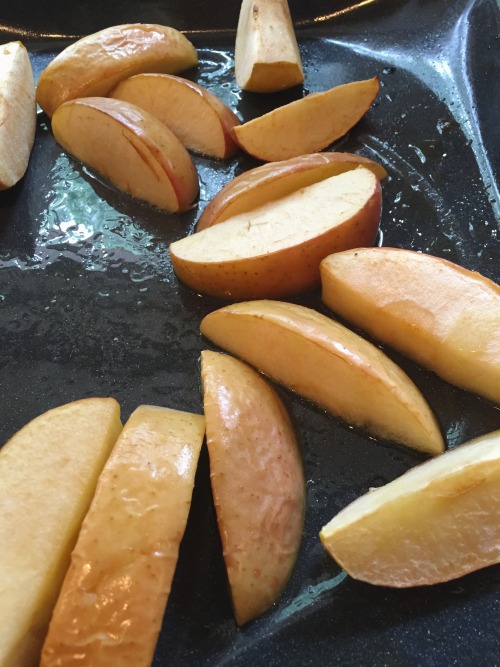 Remove core from apple and cut into wedges. Toss with about one tablespoon of oil and roast at 400° for about 20-25 minutes. Remove from oven and set aside. 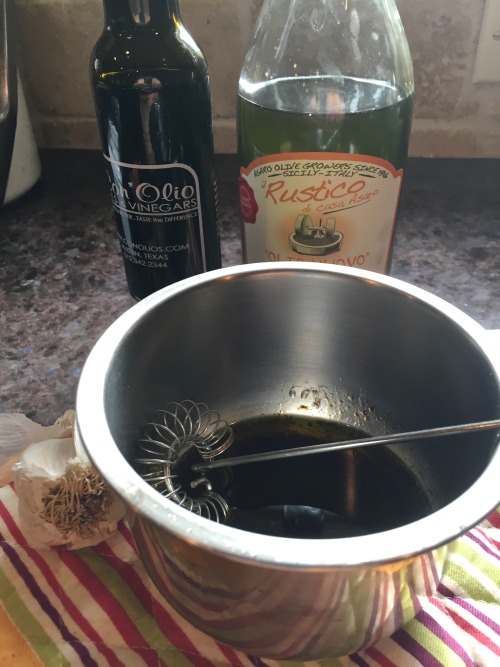 Whisk together the dressing ingredients and let stand at room temperature for 30 minutes to let flavors meld. 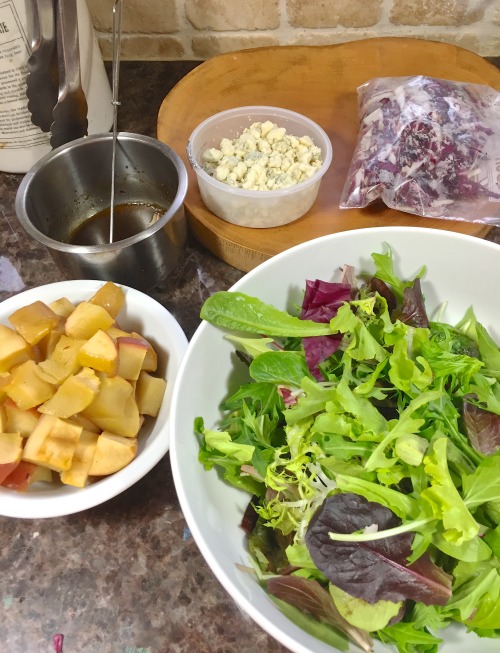 Have all your ingredients ready and get your grill heated up. 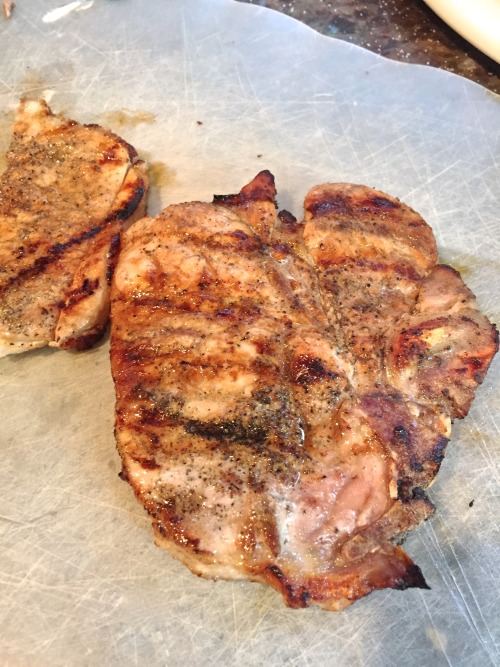 Grill until done then chop up to put on top of your salad. 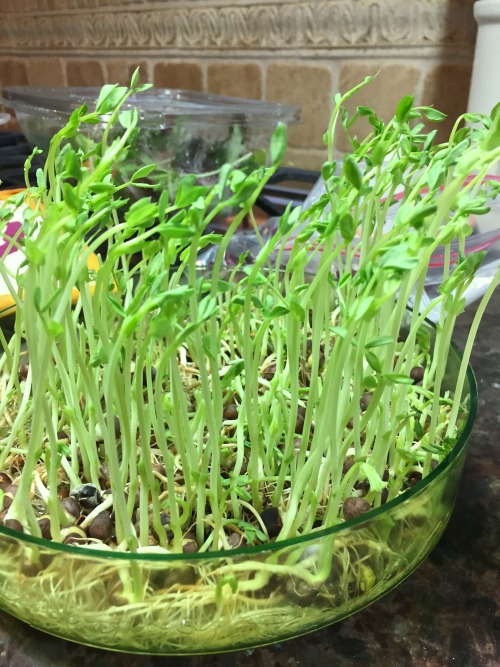 You don’t have to add pea shoots but I just happened to have some growing. 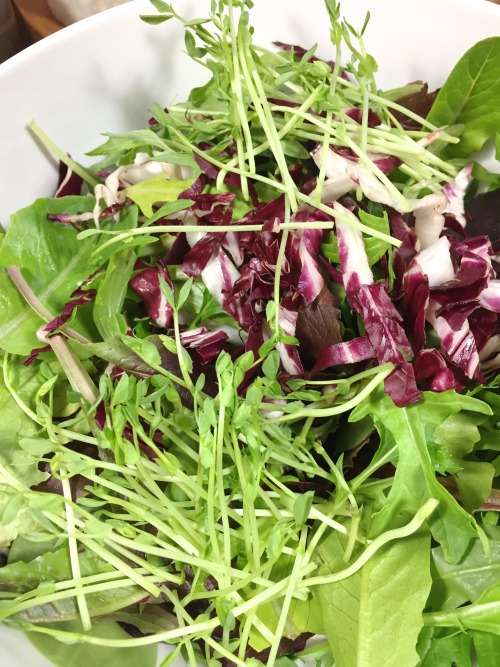 I start by added the mixed lettuces to a bowl or plate then I added some pea sprouts and radicchio. 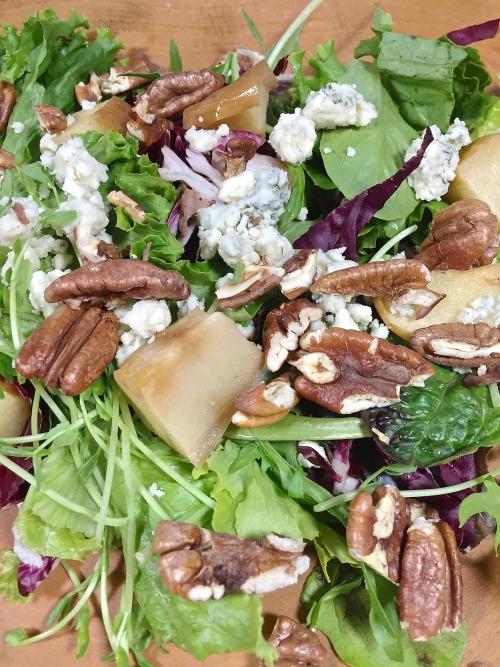 Add on the blue cheese, roasted apples and the roasted pecans. 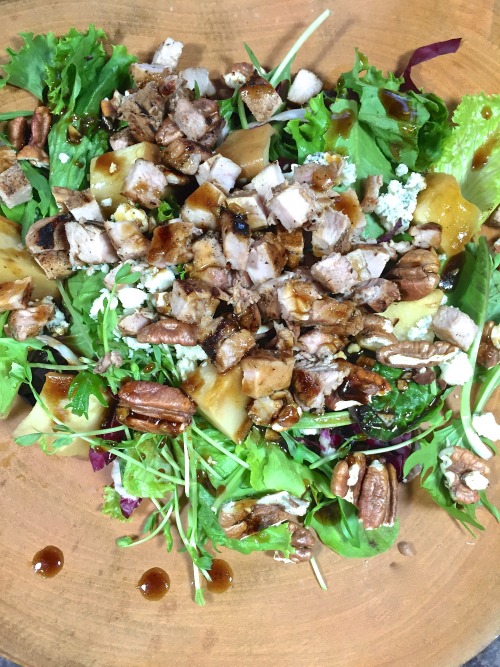 Drizzle on dressing. The dressing is really good so you may want to double the recipe.

Pork and apples make a perfect combination for this salad. Light your grill and start those chops.
Write a review
Save Recipe
Print
Ingredients
Dressing ingredients
Instructions
Notes
Rosemary and the Goat https://rosemaryandthegoat.com/ 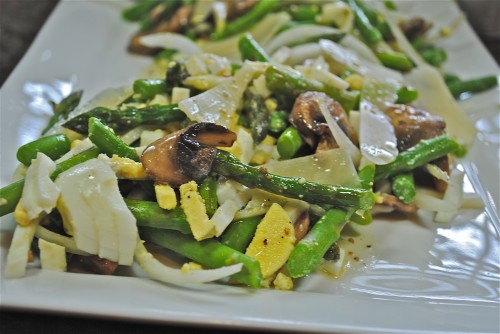 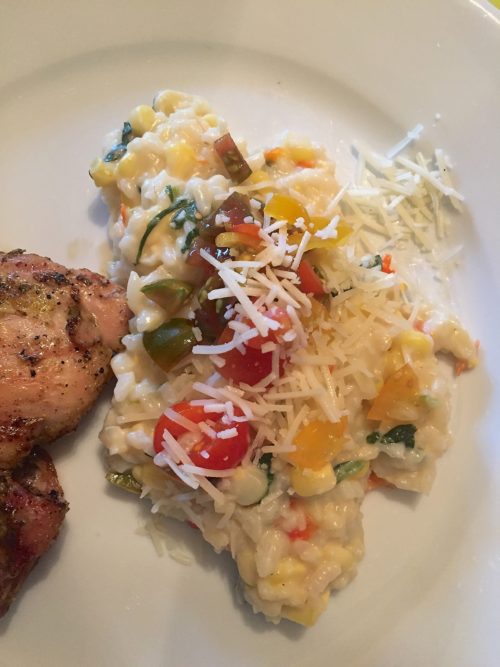 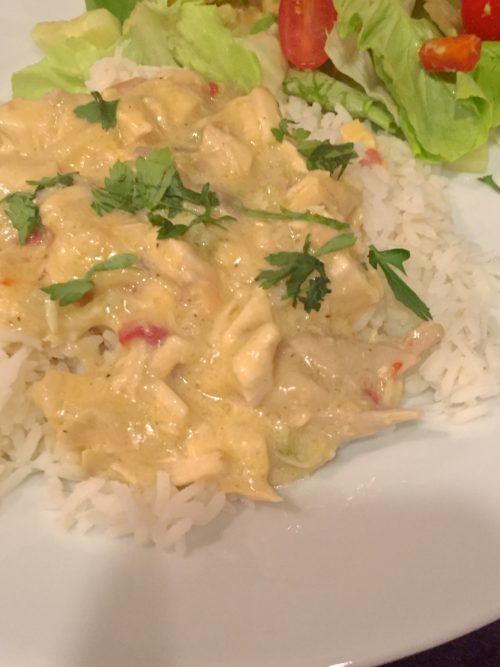